The exhibition traces the biography of the composer through the important collection of photographs conserved at the Archivio Luigi Nono. Over the past years, the Archivio has reorganised, catalogued and digitised its photographic holdings and has acquired new images, which illustrate and complete the story of Luigi Nono’s life: from his childhood and adolescence to his studies in Venice and Padua; from snapshots with his family in the 20’s and 30’s – in his mother’s family house in Limena, excursions in the Venetian Lagoon to Torcello, the summery days in Bassano, the mountains of Cugnach – to his education, in a cultured and free-spirited Venice, which, in spite of the hard times, nurtured the young Nono’s ideals. The album retraces Nono’s Italian and international musical itinerary – from his early studies with Bruno Maderna and Gian Francesco Malipiero to the Darmstadt years, from the experiences at the Studio di Fonologia of the Rai in Milano, to travels and teaching in Latin America, from his friendship and collaboration with Abbado, Kremer, to the years with the Experimentalstudio in Freiburg. It also depicts his friendly relationships with great writers (Ungaretti, Calvino, Jabés), major figures in politics (Castro, Ingrao, Napolitano), leading exponents in theater (Piscator, Weiss, Müller), and in the arts (Vedova, Burri, Guttuso). Interwoven with these are the major episodes of Nono’s private life: the encounter with Nuria Schoenberg, his future wife, the birth of their first daughter, Silvia, (in a beautiful reportage by the young composer Lachenmann, Nono’s student at the time), followed, a few years later by the birth of Serena Bastiana. Nuria, Silvia and Serena Bastiana accompanied him in all his travels, often to distant places (a long sojourn in Latin America, another in a dacha near Moscow with Juri Ljubimov during their preparatory meetings for Al gran sole carico d’amore), and were constantly present in the composer’s life and work.

The pictures of Nono’s studios in Venice, Freiburg and Berlin are not only of biographical interest. Nono obsessively and skilfully documented the space with which he surrounded himself, with its images, forms, figures and views: from his vast studio in Venice, with its view of the Venetian Lagoon, to the library strewn with musical manuscripts and notes; from views of the seasonal changes as seen from his room in the Hotel Halde, deep in the Black Forest, to his stays in Berlin. Just as important were his travels, which reveal a personal quest: Moscow, Tallinn in 1963, South America, Spain in the early 80’s (Granada, Seville, Cordova), the North Pole in 1986, and Japan via the Trans-Siberian railroad in 1987. 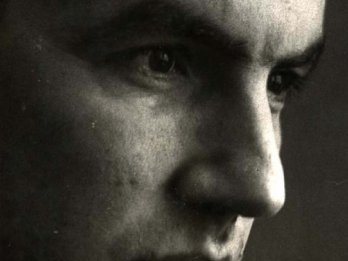 Just as noteworthy are the important series of photo reportages of works for the stage. In particular for the world premieres of Intolleranza 1960 (over 100 photos taken from four different angles), of Al gran sole carico d’amore (shot by Luigi Ciminaghi – a major stage photographer) and of Prometeo, which Nono photographed with his own camera at each phase, from the first inspection of the Church of San Lorenzo (with Piano, Vidolin and Haller) to the demanding staging for the Venetian premiere, photographed by Graziano Arici. There are many unpublished images that help to reconstitute the composer’s artistic and personal history, thus revealing, through the chronology of his encounters, travels and contacts, the humanist, artistic and political influences, ever-present in the composer’s work and life. The photographic exhibit, divided into 11 sections, with over 200 original photographs and 500 digitised images, opens a new door to the composer’s biography and, at the same time, documents key episodes in the history of contemporary music and theater, of the arts, and also of Venice.